Local Veterans, Veterans from Around the Country, and 51 for 51 Advocates Call on Biden, Klobuchar, and Sanders to Support a Real Path to D.C. Statehood

FOR IMMEDIATE RELEASE:
Monday, February 24, 2020
PRESS CONTACT:
press@51for51.org
RELEASE: Local Veterans, Veterans from Around the Country, and 51 for 51 Advocates Call on Biden, Klobuchar, and Sanders to Support a Real Path to D.C. Statehood 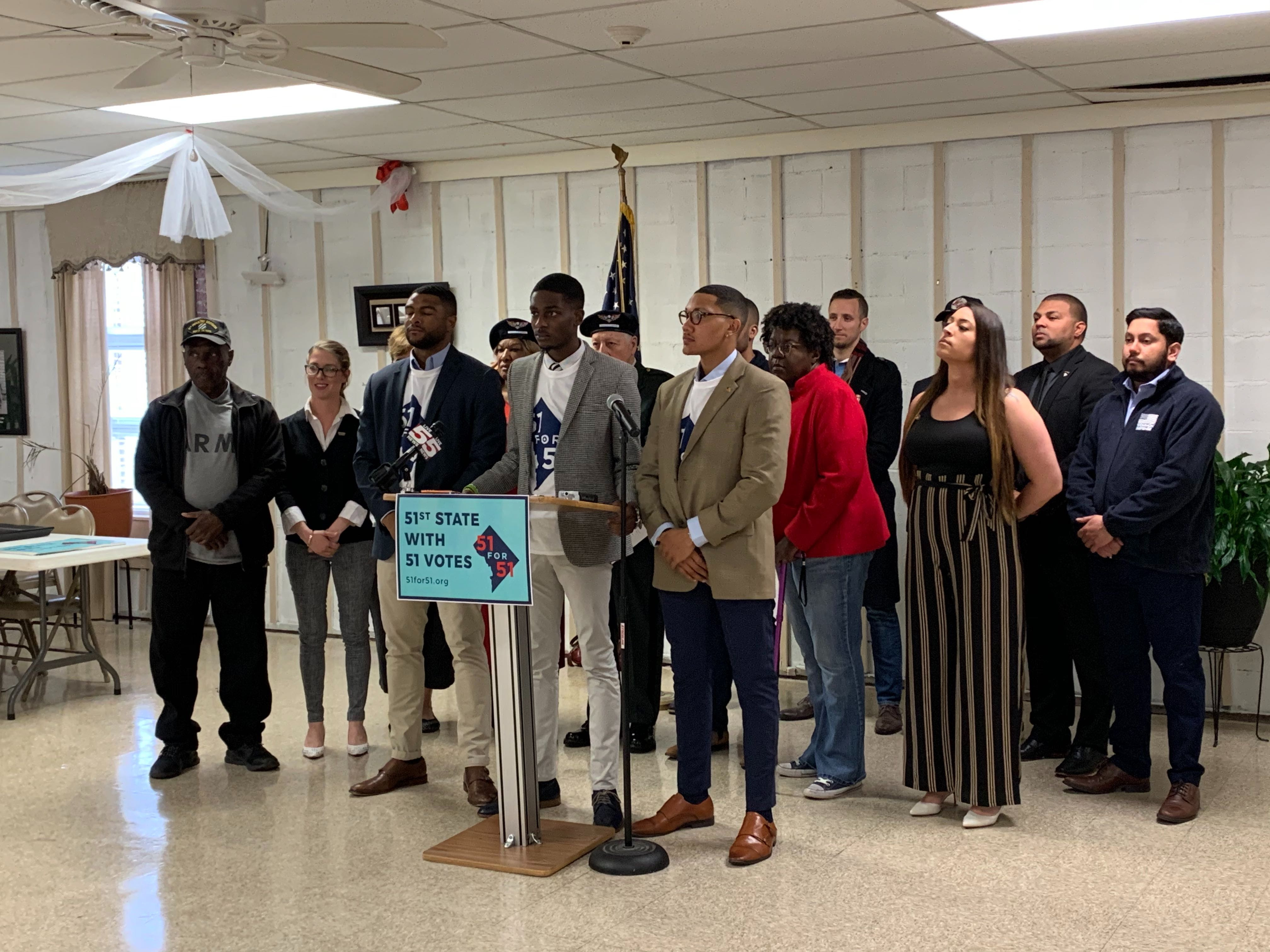 Above: 51 for 51 advocates and veterans from around the country stood together to call for a real, viable path to congressional representation for Washington, D.C

CHARLESTON, S.C. — Today, 51 for 51 advocates and veterans from around the country stood together to call on former Vice President Joe Biden, Senator Amy Klobuchar, and Senator Bernie Sanders to support a real, viable path to congressional representation for Washington, D.C.: bypassing the filibuster to pass statehood legislation with only 51 votes in the Senate.

“When we go to war, we don’t fight for our states, we fight for the freedoms we enjoy in this country. When I came home to D.C. to find that I and thousands of others in D.C. didn’t enjoy those freedoms, I took up the fight for D.C statehood because it’s critical that we have a vote in Congress on the issues that matter most to us. We are asking Biden, Klobuchar, and Sanders to support a real path to statehood for over 700,000 D.C. residents to ensure their voice is heard in Congress and they have a vote that counts,” said Vietnam veteran Hector Rodriguez, chair of Veterans United for D.C. Statehood.

“We are tired of people playing political games with our rights as D.C. residents. We have no vote in Congress which means we have no voting member fighting for our community for issues that matter the most to us. It’s not enough to just support D.C. statehood — we have had enough of the lip service. It’s time for Biden, Klobuchar, and Sanders to join the seventeen other former and current candidates and support a real, politically viable path to full representation for 702,000 D.C. residents,” said 51 for 51 advocate Ty Hobson-Powell.

“Throughout our history, we’ve expanded representation in this country, but, for over 200 years, the people of D.C. have lacked voting representation. As a veteran, it’s important to me that other veterans and people of color in D.C. have their voices heard in Congress. It’s past time we give D.C. residents a real path to votes in Congress and that means 51 votes,” said Air Force veteran Kate L. Smith.

Today’s event was part of a larger push to get the endorsements of Biden, Klobuchar, and Sanders for 51 for 51’s proposed path for D.C. statehood. Charleston NAACP President Dot Scott penned an op-ed in the Post and Courier last week in support of our efforts and Rep. Gilda Cobb-Hunter filmed a video to support 51 for 51. We also released videos on what statehood would mean for our democracy, representation for D.C. residents, and the fight to prevent gun violence in America.

Seventeen current and former presidential candidates, including Senator Elizabeth Warren, Mayor Michael Bloomberg, former Mayor Pete Buttigieg, and Tom Steyer, support the only real, politically viable path to D.C. statehood: passing statehood legislation with just 51 votes in the Senate. Veterans from South Carolina, D.C., and across the country are standing together to call on Biden, Klobuchar, and Sanders to join their fellow candidates and support the only real path for D.C. statehood.

# # #
51 for 51 is a coalition comprised of D.C.-based and national groups committed to equal representation rights for D.C.’s over 700,000 residents. The coalition of 20 progressive groups says American citizens living in the District deserve a voice in Congress and control over their own local laws.
Additional Information
Website: https://www.51for51.org/
Twitter: https://twitter.com/51for51